Blog - Latest News
You are here: Home1 / My Pandemic-Inspired Down the Hall Friendship with Tamar and Mr. Gary 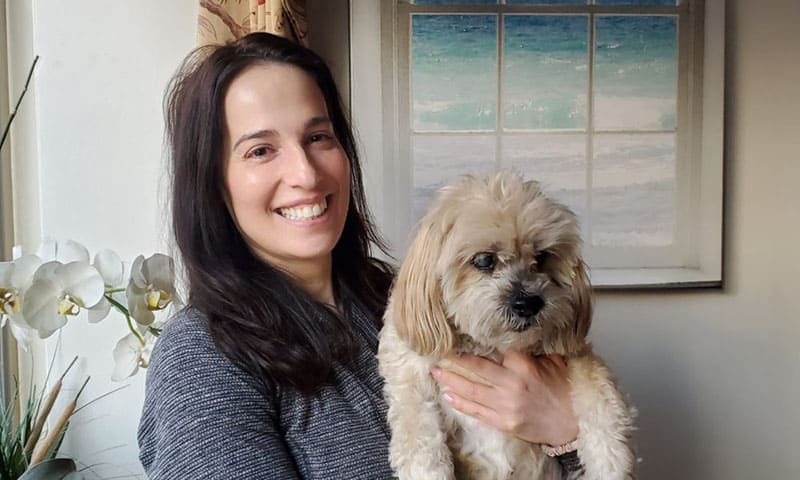 My co-op on 70th Street in New York is filled with dog lovers like myself. Our four-legged friends help humanize what can sometimes be a hard city. So when a new shareholder moved down the hall in February 2020, I was thrilled to learn she too had a dog. My rescue pups, Sophie and Bindy, would not be the only dogs on the floor.

The new resident and I met in the freight elevator. In my building, dogs are only allowed in the service elevator. That is where my two Chihuahuas and I first met Tamar, a lovely young woman, and her 15-year-old rescue, a ShiTzu terrier named Gary. Though there was a good forty-year age gap between us—her age was around 40, I was 80 when we met—we bonded over our mutual love for our dogs.

“Mr. Gary,” as I came to call him, was Tamar’s first and only dog. He had been with her from puppyhood and was now legally blind and a bit hard of hearing. Age was creeping up on him, but you’d be hard-pressed to recognize that unless you were told. Aside from being much pickier about his food, less interested in treats, napping quite a bit more these days, he still walked with confidence and marked his territory with glee. Mr. Gary is a character, and when Tamar brought him over for a visit—which she began to do more and more as the pandemic began to isolate all of us from our usual activities—he got along fine with my dogs. Essentially, they ignore each other. I also have a cat named Raina, who must be locked away when dogs visit. Well—any dogs but Mr. Gary. For some reason, she ignores him, and he doesn’t bother her.

As our friendship grew, the fact that I was twice Tamar’s age didn’t seem to matter. We found areas of connection. We both love the ridiculous “My 90- Day Fiancé” franchise. We are both in creative professions. Tamar is an expert in designing and marketing skin creams and other beauty products, and I ghostwrite and market books. I have three husbands behind me and extensive experience in online dating. She was also dating online—another topic of mutual interest.

We also began to help each other care for our pets. If she has to be away for a full day, I will take Mr. Gary in, feeding him, walking him, and giving him lots of affection. I am now “Aunt Judy.” When Tamar and Gary get back from one of their walks, he invariably runs down the hall to stand in front of the outer door to my apartment. Too bad he can’t ring the bell!

A few months ago, my beloved Sophie had a sudden convulsion and died. She was being treated for liver cancer, so the death was not wholly unexpected. Still, it was a harrowing experience. Tamar was the first one into my apartment and was a great comfort. When she wanted to spend more time with her parents, Mr. Gary spent more time in my apartment. As the pandemic intensified and both of us saw fewer and fewer people, being able to spend time together, watching movies, or share a meal or a cocktail unmasked, was a great gift. Tamar once said one of the most extraordinary things to me was: “Even though we have 40 years between us, I think of you as a contemporary. You have become one of my best friends.”

I have friends of all ages, including many my age or significantly older. My last boyfriend was just shy of age 99 when he died—another story I will tell you sometime soon. The fact is that I do not go out of my way to cultivate younger friends. But my very best friend in the world, @silverdisobedience Dian Griesel, is 20 years younger, and with us, as with Tamar, the years between us are a non-factor. Or perhaps better said, are an advantage. I can share some experiences that may benefit them. They are more actively engaged in the world in a way that brings me to the heart of today’s world through their energy, ambition, curiosities, and accomplishments.

I’ve learned that age is just a number. I hope younger people will read this and look around at some of the “CelebrEighties” they could be friends with and get past any preconceived notions. All of this is to ask you, dear reader: do you have an inter-generational friendship that likewise pleases you? Want to share that with us?

My Year of Dating Cary Grant
Scroll to top